The divinity of Mary

Luke 1:28 And the angel came in unto her, and said, Hail, thou that art highly favoured, the Lord is with thee: blessed [art] thou among women.

These are the words which were spoken to Mary the wife of Joseph by the angel Gabriel. Mary was indeed blessed among women because through her union with Joseph the Most High God would keep his promise to Israel by raising up the Messiah out of the house and lineage of King David.

Luke 1:32 He shall be great, and shall be called the Son of the Highest: and the Lord God shall give unto him the throne of his father David:

By all accounts the scriptures tell us that Mary was a virtuous woman, no more, no less. However as the centuries passed biblical scholars would go to great lengths to magnify her role to be nothing short of divine.

The Divinity of Mary

ROME, FEB. 11, 2008 (Zenit.org).- Five cardinals have sent a letter inviting prelates worldwide to join them in petitioning Benedict XVI to declare a fifth Marian dogma they said would “proclaim the full Christian truth about Mary.”

The text, released last week, includes the petition that asks the Pope to proclaim Mary as “the Spiritual Mother of All Humanity, the co-redemptrix with Jesus the redeemer, mediatrix of all graces with Jesus the one mediator, and advocate with Jesus Christ on behalf of the human race.”

The above excerpt shows just how far many so-called scholars and theologians have erred in their understanding of biblical truth. (You can read the original text here)

Luke 11:27-28 And it came to pass, as he spake these things, a certain woman of the company lifted up her voice, and said unto him, Blessed [is] the womb that bare thee, and the paps which thou hast sucked. (28) But he said, Yea rather, blessed are they that hear the word of God, and keep it.

The above scripture shows us that even during the times when Christ walked the earth there were those who would attempt to elevate the role of Mary above that of the Messiah. In this case the Lord Jesus quickly reproves the woman and gives glory instead to the Heavenly Father.

The article goes on to declare Mary as joint mediator and redeemer with Jesus Christ. This is declared despite the fact that this contradicts all biblical prophecy about the coming of the Messiah and his role since before the worlds were formed. The scriptures tell us in great plainness that salvation lies only with the Lord Jesus Christ.

Acts 4:12 Neither is there salvation in any other: for there is none other name under heaven given among men, whereby we must be saved.

Throughout history many tyrants and would be rulers were able to hold power and authority over men by claims of a divine birth. Whether it be Alexander the Greek claiming to be the son of Zeus or Julius Caesar claiming his mother to be Athena, the legends go on without number. From the time of Babylon onward the concept of Virgin Birth has existed. For centuries what was strictly a heathenistic doctrine has found a lasting home in so-called Christianity with the virgin birth of the Messiah. The below scriptures show us that the Lord Jesus came out of the house and lineage of King David by way of the union of Joseph and Mary.

Acts 2:29-30  Men and brethren, let me freely speak unto you of the patriarch David, that he is both dead and buried, and his sepulchre is with us unto this day. (30)  Therefore being a prophet, and knowing that God had sworn with an oath to him, that of the fruit of his loins, according to the flesh, he would raise up Christ to sit on his throne;

Romans 1:3 Concerning his Son Jesus Christ our Lord, which was made of the seed of David according to the flesh;

The unremarkable birth of Jesus Christ in no way diminishes his divinity or purpose. It is in fact his birth as a mortal man that celebrates his triumph over the sins of the flesh and gives redemption to all true worshipers.

Hebrews 2:16-18 For verily he took not on [him the nature of] angels; but he took on [him] the seed of Abraham. (17)  Wherefore in all things it behoved him to be made like unto [his] brethren, that he might be a merciful and faithful high priest in things [pertaining] to God, to make reconciliation for the sins of the people. (18) For in that he himself hath suffered being tempted, he is able to succour them that are tempted.

Another little known fact is that the union of Joseph and Mary brought forth many children. The so-called Virgin Mary was not a virgin but the mother of Jesus and his siblings.

Mark 6:3 Is not this the carpenter, the son of Mary, the brother of James, and Joses, and of Juda, and Simon? and are not his sisters here with us? And they were offended at him.

Below are several examples of virgin births throughout the world that far pre-date Christianity. 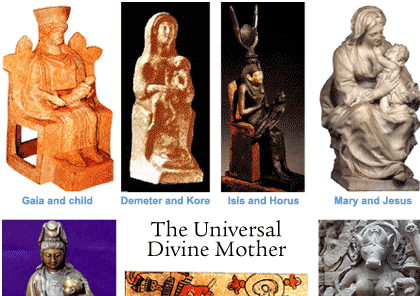 It should also be noted that the concept of Immaculate Conception differs from Virgin Birth. In 1854, Pope Pius IX proclaimed the dogma of the Immaculate Conception and stated: “The most Blessed Virgin Mary was, from the first moment of her conception, by a singular grace and privilege of almighty God and by virtue of the merits of Jesus Christ, Savior of the human race, preserved immune from all stain of original sin.’” This doctrine purports that Mary was born perfect and without sin. Are there scriptures that support this doctrine? The answer is no.

Ecclesiastes 7:20 For there is not a just man upon earth, that doeth good, and sinneth not.

Romans 3:23  For all have sinned, and come short of the glory of God;

This is another example of how men have attempted to establish and worship Mary as a divine being. Christ was the only man to walk the Earth and not commit sin and that is what makes him so remarkable.

Jeremiah 44:25-27  Thus saith the LORD of hosts, the God of Israel, saying; Ye and your wives have both spoken with your mouths, and fulfilled with your hand, saying, We will surely perform our vows that we have vowed, to burn incense to the queen of heaven, and to pour out drink offerings unto her: ye will surely accomplish your vows, and surely perform your vows. (26)  Therefore hear ye the word of the LORD, all Judah that dwell in the land of Egypt; Behold, I have sworn by my great name, saith the LORD, that my name shall no more be named in the mouth of any man of Judah in all the land of Egypt, saying, The Lord GOD liveth. (27)  Behold, I will watch over them for evil, and not for good: and all the men of Judah that [are] in the land of Egypt shall be consumed by the sword and by the famine, until there be an end of them.

The Heavenly Father makes it clear the disdain he has towards those who would partake in the worship of the Queen of Heaven. For those of our people who are currently partaking of this sin, repent and give honor to the Heavenly Father and the Lord Jesus Christ who are worthy of all heavenly praise. 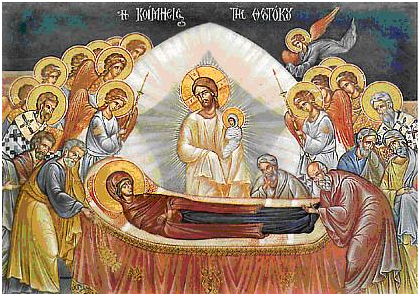